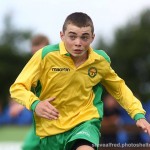 Elite Section:
The Kerry u13 Elite Boys put themselves in pole position to reach tomorrow’s Galway Cup semi final following a 3-0 win over NEC (North Eastern Counties).
Darragh Lyne got Kerry off to the perfect start and his goal was followed up by one from Devon McKenna and a cracker from distance from Ryan Kelliher.

It left Northern Ireland, Kerry and Athlone all on 6 points (Athlone having beaten NI 1-0). Northern Ireland and Kerry were only seperated on goals scored but the Kingdom’s second place looks. at the time of writing, to be good enough to qualify for the Cup semi finals.
Kerry are awaiting the results of Donegal v Cabinteely and North Tipp v Roscommon before this is confirmed.

Boys Section: Following the two 0-0 draws yesterday the Kerry boys founds the target on 4 occassions after going 1-0 down early on.
Caolan Ryan set up the first two for the razor sharp Keith Suiter. Boki Nikic added a 3rd and JR wrapped up the scoring.
The Boys sit on 5 points with a game to play against Limerick County tomorrow.
With 2 groups in this section it’s straight to finals and play-offs on Saturday to finish off the competition.
The two group winners meet in the Cup final with the Plate final featuring the two group runners up.
The 3rd, 4th and 5th in each group play off for the places.

Rian Rested:
Rian O’Sullivan was rested by the Irish u16 manager Tom O’Connor in their 4-1 win over Ipswich.
The Dynamos player is expected to start against Sunthorpe this evening (Thursday). 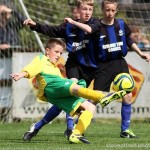 Our boys have done really well on Day 1 of the Galway Cup with the boys in the Elite section up against an Athlone team that have just returned from Wales, where they reached the Final of that tournament, in their first game of the week. Kerry played some really goon football but failed to convert they chances in front of goal. In the second game of the day for this team they lined out against Northern Ireland who had beaten NEC 6-1 in the early kick off. Kerry moved the ball around the pitch with speed and control and were clearly in charge at half time. Northern Ireland came out for the second half looking to break Kerry down but Kerry were able to deal with everything put in their path. Ryan Kelliher was the first to get on the score sheet with a well worked team goal, he followed this with a audacious lop falling  inches over the bar. Dylan O Neil was the next to have a go was a  rasping shot that rattled the crossbar before Darragh Lyne drove home our second to seal the win.