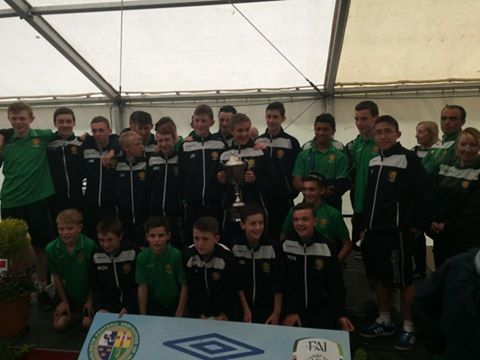 As winners of the Kennedy Cup in June this Kerry squad will be the target for all others as the 15’s Inter League gets underway. And that was certainly the case in this opening round against Cork in Celtic Park, Killarney.

The visitors blitzed Kerry in the opening minutes and went ahead after 4 minutes when Tyreik Wright got on the end of a Ethan Varian cross to knock the ball home.

And before Kerry could recover they were 2-0 down after an Oran Daly free kick found its way into the home side’s net.

Indeed only for a very good Mark Kelliher save from Adam Murphy Kerry would really have been in trouble.

But you don’t go through the Kennedy Cup unbeaten unless you can handle adversity and gradually Kerry’s overall work rate and ability began to pay dividends.

In the 15th minute a very good move ended with James Rusk setting up Darragh Lyne who shot brought a great save from Cork keeper Adrian Hegarty. Kerry then forced a number of corners and from the final one Rusk found David Dineen who forced the ball home to half the deficit. As the half ended Kelliher made another good save to leave Kerry behind 2-1 at the break.

However the second half was a totally different affair as Kerry took over and were level within five minutes of the restart, David Rogers, who had a big impact when he came on, put in a pinpoint cross that Patrick Darcy nodded home.

With the new Roll On / Roll Off substitutes the Kerry management made some very good moves and shortly after coming on Caolan Ryan was causing havoc on the right wing. Ten minutes into the second half he again beat the Cork defender for pace and once again Darcy was in the right place to complete the Kerry comeback and put them ahead for the first time in the game.

This seemed to knock whatever fight was left in Cork out of them and Kerry looked dangerous with every attack. On the 55th minute Darragh Lyne put in a very dangerous free kick that Dylan Murphy beat the Cork keeper to but his effort came back off the bar. However Darcy was buzzing now and he completed his hat trick with a smart finish.

4 became 5 in the 62nd minute when good play from Lyne, Rusk and Ryan saw the latter cross into the box. Ryan Kelliher swivelled spectacularly to volley the ball home. Overall bar the first ten minutes this was a very good Kerry performance with a very high work rate from all the players and in the end a well- deserved victory.

Kerry are in a 5 team group and will play again in February when they are away to North Tipperary. This will be followed by a home game against South Tipp in March and they round out their Group games away to Clare in early April. There are two Groups in Munster and following these matches the two Group winners will play off for a place in the National Semi-Final.