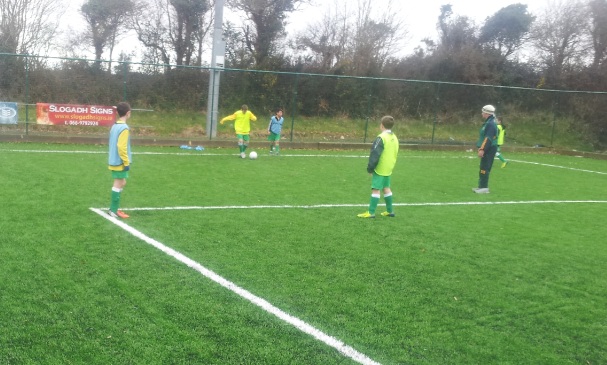 Debut win for Dynamos 12 B:

Camp Juniors B 1-2 Tralee Dynamos B

Listowel Celtic A 0-3 Killarney Celtic A

Park B 4-7 Listowel Celtic B

Killarney Athletic A 1-3 Park A

In a back game in the 12’s National Cup Listowel Celtic were unable to join Killorglin in the last 32 in the age group. Despite the best efforts of Oisin Moloney, Aoife Horgan, Kian Clancy and Dylan Quinn they bowed out of this year’s competition 4-0 away to Pike Rovers in Limerick.

Killorglin go top of the Premier:

Killorglin moved to the top of the JK Sports 12 Premier with their third win in three. The leap-frogged over The Park after defeating the Tralee side 3-0. Dylan Moriarty was the star of the show netting twice and setting up the third.

For the Park Armin Heinrich and Gavin Sheehy were the best on the day.

Camp Juniors missed the chance to go into second on their own as they had to settle for a point against Killarney Celtic who will be glad to have opened their account. Camp Juniors, now in joint second, will however be happy as they were 2-0 down. Daniel Okwata and Kieran Dennehy put the Hoops ahead but goals from Maurice O’Connell and Stephen Smith Galvin saw the points shared. Killarney Celtic did have two goal rightly ruled out for offside.

In Division 1 Inter Kenmare have moved level at the top of the table with Ballyhar after defeating them 4-1. Corey Murphy hit another two goals, his 8th and 9th of the season, and these were added to by Caleb Brosnan and Mark Torpy. John Power replied for Ballyhar.

Killorglin B moved onto 7 points, 2 behind the leaders, after their 5-2 home win over Killarney Athletic. Jack Sullivan and Zin Flaherty both scored two each with Cillian Foley getting the fifth. Rossa Bellew and Darragh Looney got the Athletic goals.

Mastergeeha kept in touch with those above them after a 2-0 win over Killarney Celtic B in Kilbrean Park. Brendan Looney and Cian Murphy were the goal scorers.

With the number of players involved at this age group Tralee Dynamos entered a B team and they won their debut game 2-1 away to Camp Juniors. Andy Rogers was the Tralee boys hero hitting both goals.

Leaders Park B are still the side to beat and are now on four wins from four. Their latest win came away to Asdee where Jordan Kissane netted. Danny Greaney and Conor Brick were the other scorers.

The Park C have been working hard and got their reward with their first point of the season. Samuel Ababubaker got their goal in a 1 all draw away at Killarney Celtic C. Joshua Livingston scored for the Hoops who had keeper Aran O’Sullivan to be on top form.

With leaders Tralee Dynamos game off Killorglin knew 3 points would see them join the Tralee at the top of the Premier. They achieved this with a 4-0 home win over Killarney Athletic. Gar Hassett hit 2 and Dara Purcell one to see them lead 3-0 before Hassett scored again to complete his hat trick.

Killarney Celtic are only a point behind after they defeated their North Kerry namesakes 3-0 in Listowel. Peter O’Sullivan, Darragh Lyne and Ryan Kelliher were the scorers for Killarney Celtic.

Mastergeeha had won their opening 3 games and were level with Camp Juniors who were not playing. The Kilbrean side were only able to secure a point from their trip to Kenmare to face Inter. Dylan Cusack scored twice for home side while Niall O’Connor and Paul O’Shea were on the mark for Mastergeeha.

Iveragh United are now on 6 points after their 5-1 away win at Celtic Park in Killarney. A hat trick from Sean Teehan and one each from Dylan Huggard and Ronan Quillan gave the South Kerry side the points while Krystian Komoga scored for Celtic C.

Ballyhar were 7-2 winners over Killorglin B at Murt Scott Park. Aran Flynn was the top scorer hitting 4, Jason Brennan got 2 and Dylan Callaghan the other while Jack Evans and Tim O’Shea who was scoring for the 4 game in a row were on the mark for Killorglin.

St Bernards are unbeaten in their 4 games but were not playing this weekend. Listowel Celtic C have now joined them on 4 from 4 after a hard fought 3-2 away win at Fenit. Michael Nolan scored twice and Robert Foley once in the win. Colm Healy and Jack Falvey were on the mark for Fenit.

Two sides win and are level at the top of the Premier:

Three sides began the day on three points with two of them facing each other as Killarney Celtic A welcomed Tralee Dynamos to Celtic Park. Mark Harnett, Lorcan Macmonagle and Oran O’Donoghue were the home side’s scorers along with an og.

Mastergeeha had a tighter encounter at Kilbrean Park as they overcame Killorglin 3-2. Two goals from Patrick Warren and one from Sean O’Leary were just enough to give Mastergeeha the points despite Dylan O’Sullivan and Ciaran Kennedy scoring for Killorglin.

Joint leaders not in action as Fenit close the gap:

Ballyhar and Camp Juniors lead this division on 9 points and were due to face each other but the game didn’t go ahead. Fenit took the opportunity to close the gap and move onto 6 points with a 3-1 win over Inter Kenmare. Sean Donnellan with 2 and Chris Murphy were their scorers while Sean Casey replied for Inter Kenmare.

The Park will be happy to have 3 points on the board following a 3-1 away win at Athletic. Owen Moynihan, Dylan Casey and Jacob Lucko got the goals for the Tralee boys with Ryan Casey replying for the home side.

Iveragh United travelled to Tralee to take on division leaders Park B. Doubles from Jack Landers and Pierce McGill gave the Cahirciveen team the three points and top spot in the table.

Castlemaine and Listowel Celtic B were level on 1 point as they faced each other. A 2-2 draw probably wasn’t what either side wanted. Roman Gallagher and Daniel Cronin scored for the home side with Nathan Dineen and Gary Carey getting the goals for Listowel Celtic B.