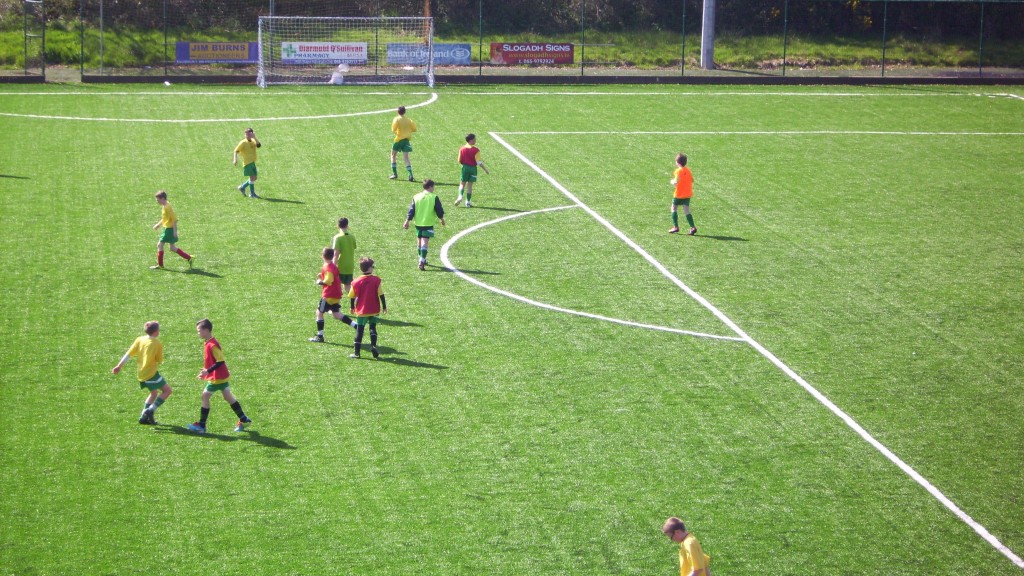 And it was Killarney Celtic C who got off to the perfect start and were 3-0 up thanks to goals from Alan Dineen, Ruairi Darcy and Jack McCarthy. Listowel Celtic C pulled a goal back through Mikey Nolan before the break to leave it 3-1 at the half.

When Paudi Looney extended Killarney Celtic’s lead with a sublime chip over the Listowel keeper there was always only to be one winner. However Listowel Celtic C never gave up and they got their second through Ted Moloney. They did go close to getting a 3rd but it was Killarney Celtic C that wrapped up the scoring with Cian O’Leary volleying home from outside the box.

Killarney Celtic’s Cian Dineen was presented with the Man of the Match Award.

Inter come from behind for extra time win:

When Shane Jordan put the Park 1-0 up after 15 minutes, during a period of dominance by the Tralee side things didn’t look good for Inter Kenmare. Jordan then hit the post in a crucial let off for Inter but they also began to create chances and David Obi in the Park goal had to make some good sides to keep his side ahead. However he could do nothing to prevent Ben Crowley equalising mid -way through the half.

The Park went ahead again in the second half when Aaron Ward scored with a spectacular volley following a corner. But Inter levelled matters again with arguably an even better goal when Dylan O’Connor cracked home a 35 yards effort to send the game into extra time.

And it was Inter Kenmare who proved to be the strongest and fittest in extra time and they went ahead for the first time, early in the first period of extra time. David O’Connor was the goal scorer and Inter Kenmare wrapped it up when Daniel Casey scored after a corner to see them take the Shield.

Having already been crowned the 15’s Premier champions St Brendan’s Park were hot favourites coming in to the 15’s Cup final. However Camp Juniors are a club that continues to improve and having never reached a Cup final in their history the put that right this season by reaching two deciders.

And they did not just turn up at Killarney Athletics pitch in Woodlawn to make up the numbers and indeed went in front early on from Davidas.

But The Park upped their game and two goals from Gearoid Fitzgerald and one from Michael Slattery put the Tralee boys 3-1 ahead at the break.

Camp Juniors tried hard to get back into the game but it was The Park that got the next goal with Michael Slattery getting his second and JR Tshikato scoring on the break the 15’s Cup was heading to the trophy cabinet in Christy Leahy Park.

Draw the outcome in Girls Premier:

The Premier action this week was in the Girls Division where Listowel Celtic and Inter Kenmare B played out a 2-2 draw. Aoife Horgan and Kiara Large scored for Listowel Celtic with Sarah Taylor and Katie Cronin replying for Inter.

In Division 1 the middle table clash of Killarney Athletic and Killorglin B finished scoreless with both sides sharing the points.

The Park had already been crowned 12 Division 2 champions and they added another point to their tally following a 1 all draw with Killarney Celtic C. Matt Healy was the scorers for The Park.

In the Premier it finished Ballyhar 0-0 Tralee Dynamos with the home side probably happier with the point. Dynamos would have leapfrogged Listowel Celtic into third if they could have taken all three points.

Athletic continue to lead in Division 1:

Dingle Bay Rovers are celebrating winning the Daly’s Supervalu 13’s Division 2 title as they won away in Ballyheigue in a winner takes all final game of the season. Goals from Dylan Geaney 2 and Tomas O’Se were enough to send the West Kerry side home to Dingle with the title and promotion for the new season.

Killarney Celtic knew that three points would see them secure the Premier Division title and they got what the needed with a 5-0 win over Listowel Celtic. Goals from Darragh Lyne 2, Patrick Darcy, Mark Cooper and Ryan Kelliher secured the title for the Killarney hoops.

Camp Juniors have wrapped up the Division 1 Shield and won again at the weekend defeating Ballyhar 4-2. Killian Falvey and Jack Farrell both got two each for the winners while Dylan O’Callaghan hit two penalties for Ballyhar.

Following on 2 minutes later they were 3-0 winners at home to Camp Juniors. Here it 2 from Dillon Robinson and one from Dara Lowth that earned their side the three points.

Killarney Athletic trail Inter Kenmare by a point in the Killarney Plaza 15’s Division 1 battle for 3rd spot and in this game they couldn’t be separated despite 8 goals being scored. Foinbarr Hickey’s hat trick and one from Stephen Crosini saw the Woodlawn boys earn a point.

In the Tralee Trophy 16’s Division 2 Camp Juniors welcomed Ballyhar with the title on the line. The home side only needed a draw and it looked very good for them when they went 2-0 up thanks to goals from Jimmy O’Grady and a Joe Kennedy penalty. However Ballyhar are nothing if not resilient and they levelled it thanks to goals from Ciaran and Joe Flynn.

The busy month of Inter League competitions begins this weekend when the Kerry 14’s Girls are the first of 3 teams into action. They will be followed by the 14’s Boys in the Kennedy Cup (June 8th to 12th) with the 16’s Girls playing in their Gaynor Cup tournament on the last weekend of the month.

Action for the 14’s Girls gets underway this Friday when they face Clare at 6.45pm. On Saturday morning Kerry play Donegal at 11.30am and Mayo at 4.30pm. They round off their Group games on Sunday when they face Longford. The play-off and final positions will be decided on Monday.

The Kerry u12 Girls played their first competitive games in a tournament in Kilmallock on Saturday. This was their first full game with offside and they were obviously nervous in their first game going down to Tipperary.

However they were quickly into their stride and in their second game they defeated Limerick Desmond 6-2. Jade Harkin got 4 with Ciara Butler and Katie Keane also scoring.

In their 3rd and final game the young Kerry girls put in a great performance when winning 5-2 over Limerick County. Jade Harkin rounded out a great day getting a hat trick. Katie Keane and Elena O’Doherty were the other Kerry goal-getters.