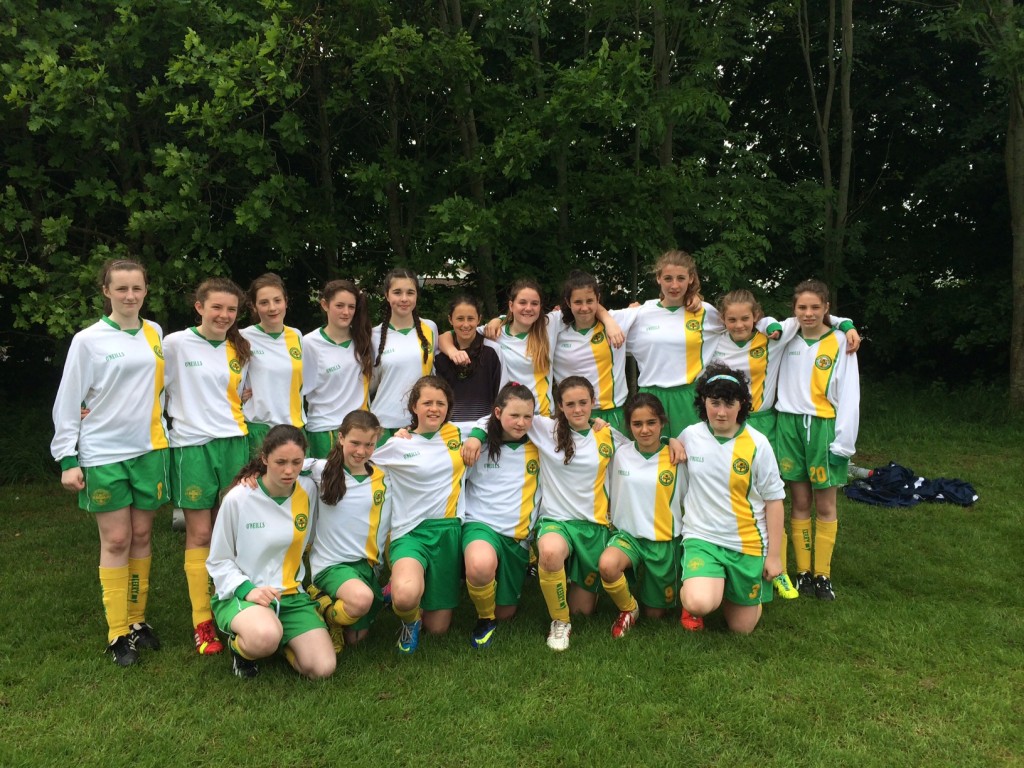 Gaynor Girls get summer Inter League season off to good start:
Results:
Umbro u14 Girls Gaynor Cup:
Kerry 0-1 Inishowen
Kerry 4-1 Clare
Kerry 0-0 Longford
Kerry 1 -1 Galway
Kerry 1 – 4 Wexford
Play offs: Kerry 2-2 Limerick County
Kerry win 3-2 on penalties.
Kerry 1-2 North East Counties.
League and Cup Results:
JK Sports 12 Girls Premier:
Listowel Celtic 5-2 Killarney Celtic
Daly’s Supervalu 13 Premier:
Killarney Celtic 1-1 Killorglin
13 Division 2:
Listowel Celtic C 2-0 Killarney Celtic C
Foundation Sports 14 Premier
Listowel Celtic 1-1 Killarney Celtic
14 Division 1:
Killorglin 2-3 Park B.
Tralee Trophy World 16 Premier:
St Brendan’s Park 3-0 Killarney Celtic
Cup Finals:
15’s Cup Final: Killorglin 2-0 Killarney Celtic
Tucker Kelly 16’s Cup Final: Park 0-1 Killarney Celtic.
Reports:
WFAI Umbro u14 Gaynor Cup:
The under 14 Girls Gaynor Cup side got the busy summer Inter League competition season off to a good start in their tournament in UL. This off course will be followed by the Boys Kennedy Cup from June 16th to 20th and the U16 Girls Gaynor (June 27th to 29th) both in UL. Later on in the summer it will be the boys in action again in the Galway Cup from August 6th to 9th.
In last week’s u14 Gaynor 18 Leagues took part in three groups of 6. Kerry opened their campaign against Inishowen and were very unlucky to lose to a last minute goal. Just before that Hannah O’Donoghue was through and taken down and for a second it looked like it was inside the box. But the referee and his assistant got it just right as it was a few inches outside!
Kerry showed no ill effects of that loss and got their game against Clare off to the ideal start with a goal from Hannah O’Donoghue inside the first minute. Kerry went on to dominate the game with Hannah adding two more to complete her hat trick and Fiadhna Tagney netting a 4th. Clare to their credit kept going and got 1 back late on. But Kerry deserved their 4-1 and put 3 points on the board.
It was a scorching day in UL and the girls completed their play with a 0-0 draw against a defensively good Longford side and it left Kerry in third place in the Group behind favourite Galway and Inishowen.
Sunday was always going to be a tough day with games against Galway and Wexford. But Kerry reserved their best football of the week for the game against the Tribeswomen. Galway were looking to secure a place in the Gaynor Cup semi-final but it was Kerry who went ahead when Ciara O’Brien headed home a Fiadhna Tagney corner.
Galway equalised 15 minutes later and weent looking for the winner but Kerry defended excellently until the last two minutes when Galway were awarded a penalty. But Edel Harnett was equal to the Galway girl and dived to her right to save the spot kick and earn Kerry the point.
Galway would go on to win the Gaynor Cup but will remember the Kerry game as their hardest of the week.
Kerry then were unlucky to meet a Wexford side that need all three points to secure a Plate semi-final spot and Kerry went down 4-1 with Hannah O’Donoghue again on the mark. It must not be forgotten that a large number of this team are underage again and will improve from this experience.
Into the playoff Kerry met Limerick County in a cracker that ended 2 all. Hannah O’Donoghue continued her prolific scoring rate getting both goals. Onto penalties and Hannah, Fiadhna Tagney and Kate Stack scored from the spot and Faidhan went into goal and saved two.
Kerry then met North Eastern Counties (NEC) in their last game of a tough but hugely enjoyable tournament with 13th and 14th place up for grabs.
Kerry went behind mid-way through the first half but didn’t drop their heads and got level before the break. Kate Stack finished a good team move to leave the score 1 all at the break. Kerry continued to create chances into the second half and hit the post and crossbar, had a goal rules out for off side and the NEC defence were putting in last ditch tackles. Kerry did not the breakthrough their play deserved and were caught with a sucker punch when they conceded a penalty with two minutes to go. NEC made no mistake to take the win and leave Kerry in 14th place.
Overall Kerry were a little unlucky in that their two losses were by the minimal margin. They deserved a top 10 finish and can take great heart in the knowledge that they held the eventual champions Galway to a 1 all draw.

Speical Thanks: The League would like to thank all those who worked with the Sqaud at the u14’s Gaynor:
Lol O’Leary, Donal Doherty, Carolann Kissane,Paula Henry,Karen McGlynn, Mary and Lucy Lyne and all the parents who travelled to support the girls.

League Reports:
JK Sports 12 Girls Premier:
Listowel Celtic wrapped up the U12 JK Sports Premier title with a 5-2 over Killarney Celtic. Aoife Horgan was in great form getting 4 for her side with the 5th coming from Hannah Healy. Shauna O’Donoghue got both goals for Killarney Celtic.
Daly’s Supervalu 13 Premier:
Killarney Celtic wrapped up the u13 double following a 1 all draw with Killorglin who finished second.
13 Division 2:
Listowel Celtic C’s great run has seen them moved to joint top of the table on 36 points, the same as Camp. There latest came following a 2-0 win over Killarney Celtic. However it might not be enough to see them take the title as Camp have two games left with Listowel Celtic finished but it was a great effort for this C team.
Foundation Sports 14 Premier:
Listowel Celtic got the point they needed to pip Kingdom Boys to the title following a 1 all draw at home to Killarney Celtic. Josh Fleming for the goal for Killarney but a Cillian Spillane goal was enough to give Listowel Celtic the Premier title finishing on 21 points with Kingdom Boys on 20. Killarney Celtic had needed all three points to overall The Park for third.
14 Division 1:
Killorglin and Park B were involved in an exciting mid table clash sharing 5 goals with the Tralee side taking the points. A Jake Deering penalty set them on their way and this was added to by goals from Paudie Linnane and Dillon Engle. Mark O’Connor and Cathal Crosby were on the mark for Killorglin.
Tralee Trophy World 16 Premier:
The Park and Killarney Celtic are in a battle for a possible double. In the first of three meetings The Park took a big step towards a League title with a 3 -0 win over a depleted Killarney Celtic. But take nothing away for this Park side who are showing why they got to a National Cup final. Sam Tarrant, Karl Mullins and Kieran Carmody got the Park goals. They now top the table by three points so Killarney Celtic will need to beat them in the final game to force a play-off.
U15 Cup Final: Killorglin 2-0 Killarney Celtic.
Division 1 side Killorglin caused a bit of a surprise in the final defeating Premier table toppers Killarney Celtic 2-0. It was a tight first half where neither keeper was really tested Dylan O’Sullivan came the closest to scoring when he was rightly ruled out for being off side. Killarney Celtic started the brightest in the second period but the Killorglin back four of Gary Mathews, Patrick Carey, Conor Standen and Kieran Kennedy were standing firm. Celtic then lost a player to a straight red and with 10 minutes to go Killorglin made their advantage count when a Dylan O’Sullivan corner was headed home by Conor Standen. Killorglin wrapped up the Cup win when Padraig Cronin lobbed the Celtic keeper in the last minute just after Celtic went down to 9 men.
Overall it was a very good performance by Killorglin who had done their homework and to wrap up a good day Dylan O’Sullivan was named Man of the Match.
Tucker Kelly 16’s Cup Final:
Killarney Celtic denied The Park a possible double and put themselves in a position to do that themselves. That will mean they will have to beat the Park again, in the last League game of the season to force a playoff but for now it’s all about celebrating the Tucker Kelly win. Conor McCarthy got the goal in the second half.
Report to Follow.