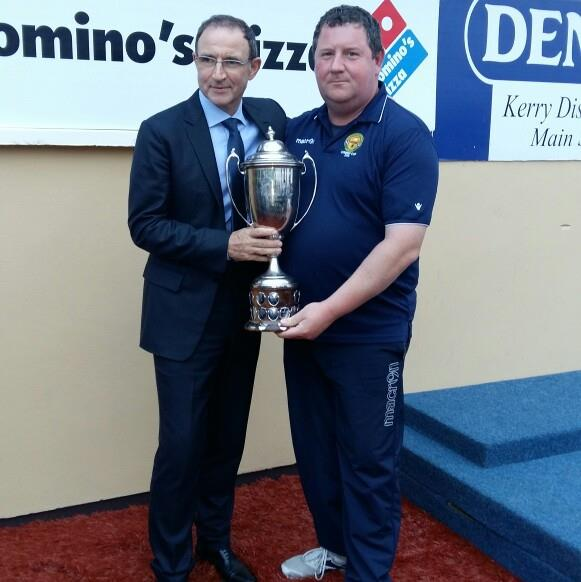 As holders of the Kennedy Cup Kerry were the top seeds in Group 1 for the draw which took place last weekend and was attended by League Chairman Martin Conway. For the 2016 tournament the other teams in our group are Donegal, Carlow and Wicklow.

The Kerry 14’s team will open their tournament at 2.30pm on Monday June 13th when they face Wicklow. On Tuesday they will have 2 games starting at 10.30am when they face Carlow and then at 4pm they finish this section by taking on Group second seeds Donegal.

The knock out stage of the Kennedy Cup begins on Wednesday with the various quarter finals.

Killarney Athletic A 0-0 Killarney Celtic A

Park B 4-0 Killarney Celtic B

Tralee Dynamos A 0-1 Killarney Celtic A

Killorglin took a big step towards the JK Sports 12 Premier as they defeated their nearest challenger The Park 1-0. Eoghan Hassett got the only goal in a close game where Killorglin keeper Adam Carey was in superb form. Killorglin move onto 18 points with the Park remaining on 13.

Tralee Dynamos move into 3rd place following their away win at Listowel Celtic. Patrick Moravski got both the goals for Tralee Dynamos with Kieran O’Carroll replying for Celtic.

Killarney Athletic, who drop to 4thand Killarney Celtic drew 0-0 with the point not really what either side wanted. Celtic keeper Peader Kelliher had an outstanding game keeping Athletic at bay.

Park B remain unbeaten in Division 1:

The Park B are now unbeaten in their 7 games in the Division and are the runaway leaders. They defeated Killarney Celtic B in their latest games 4-0 thanks to double strikes by Kieran O’Connor and Cian O’Neill.

Ballyhar moved ahead of Mastergeeha and into 2nd place following a 2-1 away win at Castleisland. James Horgan got both the goals for the winners.

7 Up for Iveragh United in Division 2:

Iveragh United won their 7th game from 7 to maintain their 6 point lead at the top of Division 2. They were 3-0 winners in their home game against Listowel Celtic B. Breece O’Sullivan, Tim Clifford and an Alex Coffey penalty saw the South Kerry side move onto 21 points.

Killorglin B are now Iveragh’s closest chasers as their 3-0 over Dynamos B sees them move onto 15 points.

Park C close the gap on top 2 in Division 3:

Park C, in third place, were involved in a cracker with the side just above them, Killarney Celtic C, with the Tralee side winning by the odd goal in 7. Mike Tansley, Lasha, Kacsper and Odhran Ferris scored for the Park who are now on 9 points while Eoghan Crowley with 2 and Kelvin O’Sullivan scored for Celtic who came back from 2-0 down but just couldn’t find the equaliser. Dingle Bay Rovers top the table on 18 points.

All away wins in the 14 Premier:

The Park remain 3 points ahead of Killarney Celtic but with a game more played in the Foundation Sports 14 Premier. The Park got the points on a 3-0 score-line over Killorglin. Killarney Celtic won 1-0 away to Tralee Dynamos thanks to a Niall McGillicuddy penalty. However Dynamos certainly belied their League position and pushed Celtic all the way with the Tralee keeper Cian Divine especially outstanding. Listowel Celtic moved into 3rd place with a 4-0 win over Killarney Athletic.

With leaders Dingle Bay Rovers, on 16 points, not playing Ballyhar took full advantage to move ahead of the West Kerry side and are now on 18 points thanks to a 5-2 win away at Inter Kenmare. Seamus Nagle and Josh McCarthy both scored twice with Jason Brennan getting the other goal in the win.

The Park B closed the gap on second place with a 4-2 win at Christy Leahy Park where the defeated Mastergeeha. Sean Teigh got 2 and Liam Magee and Elliot Lynch one each in the win with Darren Lehane getting both goals for Mastergeeha.

Ballyheigue moved into mid table with a 4-1 home win against Iveragh United. Conor O’Sullivan 2, Tomas Gaynor and Nathan Guerin were the Ballyheigue scorers with Jack Kelly replying for Iveragh.

Leaders beaten and joined at the top in Division 2 Shield:

Leaders Park D suffered their first defeat of the season when they went down 2-1 at home to St Bernards. The Saints remain in 3rd place on 15 points. Two goals from Oisin Maunsell gave the Saints the three points with Darragh Caplis replying for Park D.

A 3-0 win by Camp Juniors over Castleisland sees them join the Park D at the summit of the table with both sides now on 21 points. Jack Shannon with 2 and Cian O’Grady got the Camp goals.

Killarney Celtic B top the Plate section in Division 2:

Killarney Celtic B took 4 points from 6 in their two games in the Shield this week. They defeated Park C in mid-week thanks to goals from Harry Buckley, Joe Kelliher, Jack McCarthy, Paul O’Sullivan, T          erry Sparling and Oisin Buckley. Jonathan Casey replied for the Park.

Their second game ended in a 2-2 draw against Fenit. Darragh Cremins and Paul O’Sullivan got the Killarney Celtic goals. Ed Stack and Neill Cassidy scored for Fenit.

The Park C took the points from their Saturday game with a 3-0 win over Listowel Celtic B.

The Park A were 4-0 winners over Killorglin in mid-week to move level with Killarney Celtic at the top of the Killarney Plaza 15 Premier. Sean McGrath hit a hat trick with Nathan Gleeson getting the other goal. Both teams are level on 18 points but the Park now have a game more played.

Leader Killarney Celtic were held to a 2 all draw in a cracker by Tralee Dynamos, leaving the Tralee Boys just two points off third place. Dynamos led twice through David Couchman and Codi Dauti with goals from Michael Devlin and Peter O’Sullivan drawing Celtic level twice.

The other game in the Division also ended in a draw with Listowel Celtic and Castleisland drawing 1 all. Jack Sheehan got the goal for the North Kerry side.

Following a 3-0 win over Killorglin Mastergeeha moved ahead of Killarney Athletic at the top of the 16’s Division 1.

Killarney Athletic and Killarney Celtic played out a 3-3 draw in a great game in the Girls 16 Premier. It was Celtic’s first dropped points in 4 games and credit to Athletic as they opened the best and went 2-0 up thanks to 2 Eva O’Donoghue goals. Ciara Randles pulled one back for Celtic and then Kate Murphy equalised following a Lauren Burke pass.

Ellen Coffey restored Athletics lead but an Anna Clifford penalty after a Ciara Randles cross was handled ensured the points were shared.

Inter League Results from today:
12’s:Limerick County 1-0 Kerry.
Kerry did everything but score in this game but it was the home side that got the vital breakthrough.
13’s: Kerry 0-1 Limerick District. Kerry 2-0 North Tipperary
Kerry were involved in the 13’s Inter County Blitz in UL and they looked to heading for a draw in their first game against Limerick District. However a late late free kick was the difference between the sides.
Kerry bounced with a 2-0 win over North Tipperary thanks to goals from Sean Stackpoole and William Shine.
Kerry 16’s 1-2 Limerick District
An Aaron Dewey free kick had Kerry level with Limerick District in a high quality game in Listowel. However the Limerick side took the win with a late goal.