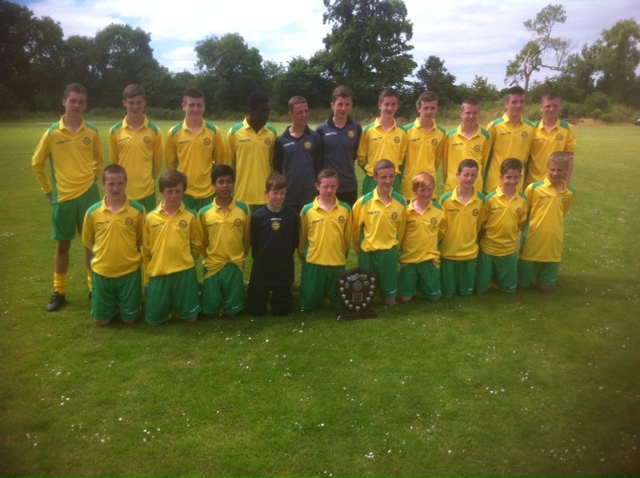 8 groups of 4 teams playing 3 group games over the opening days of the tournament in scorching conditions. No I am not in Brazil covering the World Cup but at UL in Limerick at the Kennedy Cup.
Kerry, the second seeds in Group 7 where Galway are the top seeds and are also in with Longford and South Tipperary. The Kingdom opened their campaign on Monday afternoon against the midland side.
Kerry 5-1 Longford:
Kerry started as hot as the conditions and a foul on the pacey winger Dara Lowth led to a Kerry free after 2 minutes. The cross was only half cleared and when Sean McGrath’s shot from the edge of the box fell to Dylan Robinson he spun and shot Kerry into an early lead.
Kerry almost went further ahead 2 minutes later when Robinson and Lowth again combined with the latter bringing a good save from the Longford keeper.
His opposite number Robert Osbourne had to be alert in the 20 minute and his fine save kept his side in front.
Kerry doubled their lead in the 25th minute when a Michael O’Gara through ball found Robinson and he made no mistake from inside the box.
Before the break Dara Lowth had made it 3 -0 and Kerry looked to be coasting but credit to Longford they got themselves back into the game on the stroke of half time. The Longford player was quickest to react after his header came back of the Kerry bar.
Kerry started the second period like the first and got their 4th when a Lowth corner was only half cleared. Slattery played a sublime pass to Robinson who scored from close range.
Darragh Lowth had a chance of a fifth for Kerry in the 50th minute when he was brought down. He took the resultant penalty himself but the Longford keeper made a very good save.
Kerry did get the 5th their play deserved in the closing minutes when the excellent Robinson pounced on a tired back pass to leave the final score 5-1 to Kerry and 3 points in the bag.
Galway defeat South Tipperary in the other Group 7 game.
Kerry 1-1 South Tipperary:
Day 2, Tuesday, is D Day at the Kennedy Cup in that after every sides two games the make-up of the group tables is finalised. First up for Kerry were South Tipp who were still smarting after running Galway so close. They began the brightest under a very hot sun and took a deserved lead on the 15 minutes when a dangerous ball in the Kerry box was met with a South Tipp boot at the back post.
Kerry rose their game and looked to hit back and went close from a Sean Carmody header and a Dara Fleming shot that was just over.
At the other end Brian O’Regan had to be at his best to deal with a South Tipperary shot but in truth the Kerry defence were combing well with their opponents attack.
South Tipp were dangerous on the break but couldn’t add to their advantage and took that slender lead into the break.
Kerry kept playing at a high tempo and continued to probe. With the heat the management wisely used a number of subs and on the 14th minute they got their reward.
A long ball from O’Regan saw Michael Slattery beating the defender in the air and turning him to get onto his own flick to give the South Tipp keeper no chance.
Horan, Walsh, Liam Curran, Kevin Williams and Slattery himself were a little unlucky not to get the winner for Kerry as they looked like the only side that would snatch the win.
South Tipp briefly threatened on the break but again the Kerry rear guard was well capable of handling them and so it finished honours even – 1 all.
On the adjacent pitch Longford were only 1-0 down until the last minute when Galway doubled their advantage to claim the win, and this after twice missing a retaken penalty.
Kerry – Galway:
The clash of the Kingdom and the Tribesmen would determine who would top the Group while South Tipp needed a big win, if Kerry lost, to overtake the Kingdom for second.
The game was played on the UL All Weather at 4pm, almost the height of the heat and proved to be a see-saw contest. Kerry went behind in the 15th minute after being under the cosh for much of the opening period.
However 10 minutes later they were level when Dillon Robinson equalised. Kerry were really playing well now and in the 33rd minute a Dara Lowth penalty put them ahead.
Kerry held out until the last ten minutes when Galway scored twice to just justify top seeding in the Group with a 3-2 win.

The first half was even – the second half even better!

The Kennedy Cup is really two competitions in one. The first half is the Group games and looking back on these results Kerry were very unlucky not to top the Group as they were in the position to do so with ten minutes left in their last Group game against Galway.
However things change very quickly, especially in the final group game as both games are played simultaneously and on adjacent pitches.
So when South Tipperary saw that Kerry had gone 3-2 down late on they knew they needed a 5th to take second in the group and they did just that.
Galway went on to take eventual winners DDSL all the way to penalties before finishing 5th and South Tipp just lost out to Cork in the Bowl final and finished 10th.
Shield:
Back to Kerry and the squad and management didn’t dwell on this disappointment but got right back into their routine, knowing they had 3 games left and a chance to win a trophy at the Kennedy Cup, something no Kerry side had done.
Kerry 4-0 WWEC:
First up was West Waterford East Cork (WWEC) and while this is a small League they are continuously improving. It took Kerry a while to get the breakthrough but once Eddie Horan opened the scoring just before half time there was only going to be one winner.
In the second half Kerry were well in control and 3 quick goals wrapped up the game – Dara Lowth in the 65th minute, Michael O’Gara in the 67th and Horan got his second and Kerry’s fourth in the 75th minute.
Kerry 3-2 South Dublin:
Kerry owed South Dublin a beating after last year when the Dub’s 1 goal win knocked Kerry off top spot in the group. This was probably the game of the week and South Dublin went ahead in the 15th minute. Dara Lowth equalised on the stroke of half time but 5 minutes into the second period the Dublin boys were ahead again.
However 2 cracking goals gave Kerry the win. Shay Walsh used the wind to curl a corner into the top corner, just under the crossbar. The South Dublin keeper got his hands on the ball but could only help it into the net.
10 minutes before the end Kerry won a free kick 25 yards out. Eddie Horan stepped up an cracked an unstoppable free kick over the wall and the keeper into the roof of the net.
All thoughts now turned to the final and who Kerry’s opponents were going to be.
Shield Final: Kerry 0-0 Donegal AET. Kerry win 5-3 on penalties.
The battle of the green and gold clad sides was an intriguing one with both sides showing great heart after a long week. Chances were in short supply but Kerry probably just shaded it. Dara Fleming, Sean Horan and Sean Doherty all caused the Donegal keeper problems while Eddie Horan also wnet close on two occasions.
Kerry ‘s keeper shared the duties and both Brian O’Reagan and Robert Osbourne had to be at their best to keep the Northern side at bay.
Just before the end of normal time Kerry suffered a big blow. After they had all their subs made Dillon Robinson was fouled and in the process injured and had to come off.
So Kerry faced the last ten minutes and all of extra time with 10 men but this Kerry side were not to be deterred and indeed had the better chances to win the game. Twice Donegal defenders cleared goal-bound efforts off the line to keep the game scoreless to the end.
Onto penalties and any Kerry nerves were on the side-lines by the huge crowd of supporters as the team showed nerves of steel.
Kerry went first and after Michael O’Gara scored Donegal missed their first handing Kerry the initiative that they never surrendered.
Kevin Williams, Michael Kelliher, Eddie Horan and Sean Keane made it a perfect 5 from 5 cueing the start of great celebrations.
Overview:
The whole squad deserve great praise the way they got over the Galway disappointment and went on to win their final three games. Their record over the week of 4 wins, 1 draw and 1 loss showed how good they were.
The coaching staff, led by manager Noel White and made up of JP Mullins, Robin O’Day, Joe O’Reilly, Paul White and Joby Costello certainly did the League proud in getting the squad to this level.
There was a great Kerry presence on the side-lines all week including family members, former players and long-time stalwarts of the League who make the annual pilgrimage to UL every year to cheer on the squad.
Kerry have secured their second seeding for next year, brought home the Shield and ended 17th so overall another successful Kennedy Cup memorable for many things but especially the heat!

Vital Sponsorship Much Appreciated:
From the League’s point of view the Kennedy Cup is a big undertaking and we would especially like to thank the following for their support: Garvey’s Listowel, Lee Strand, Kerry Meats, Cliffords Cash & Carry, Sean Doherty and Teresa Welsh – Glin.