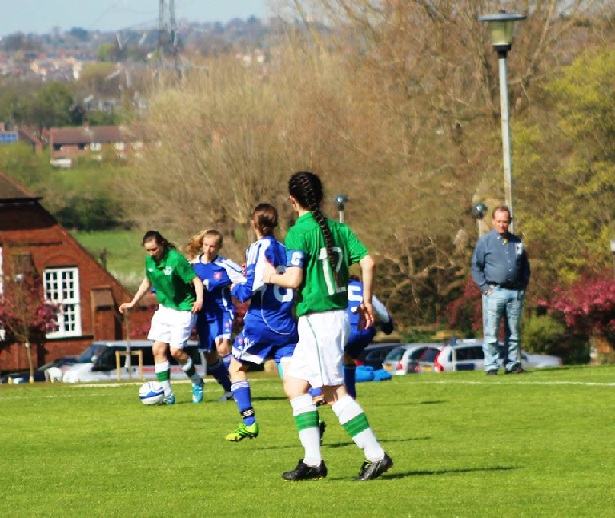 15 teams competed in 4 groups in the Provincial finals of the WFAI U12 Girls National Blitz Cup. Each of the group winners would qualify to face 4 teams from Leinster, Connacht and Ulster in the AUL on October 26th.

Listowel Celtic, managed by Horgans, went through their Group unbeaten opening with a 2 all draw with Ennis Town. They followed this up with a big win over Ferrybank 6-0. With Ennis Town still in the hunt Listowel Celtic knew they needed a win to be sure of topping the table and got the points they needed with a hard fought 1-0 win over Carrigaline. The North Kerry Hoop’s 7 point gave them the Group q title.

Killarney Celtic were in Group 3 and opened with 2 draws against Regional United and Nenagh Town. They were unlucky to lose out to Askeaton in the last game but even a win would not have seen then qualify as Regional United from Limerick were on 7 points and through.

The other two Munster spots were taken by Lakewood Athletic from Cork and Clare’s Connolly Celtic.

In’s and Out’s in the National Cup:

The kick off this season’s SFAI National Cup came very early in the season for Kerry teams. Some Leagues have already played 3 or 4 games and this probably stood to them. However there were some very good Kerry performances despite the draw being unkind with all but 2 side away.

None better that Camp who won 7-0 away to Askeaton. The home sides keeper kept Camp at bay until early in the second half. Once Gavin O’Cinneide got the first the floodgates opened and Camp added goals from Conor O’Leary and Maurice O’Connell who got 2 each with Cian Wright and Oisin Smailes getting one each.

Killorglin got through without kicking a ball as they got a walkover from Coole.

Inter Kenmare were also on the road but went down 6-2 to Newport. Mark Thorpy and Mark Casey were on the mark for Inter.

Killarney Celtic and Shannon Town went all the way to penalties in Clare before the home side went through. William Shine got the Celtic goal.

Pike Rovers were too strong for the Park in Limerick while Tralee Dynamos went out 4-2 away to Burren in Clare. Washington Solomon scored both goals for Dynamos.

Kerry was guaranteed at least one team in the second round draw as the two Tralee sides were pitted against each other. Sean Kennedy scored twice for Dynamos who were only 2-1 down at half time. However St Brendan’s Park took over and hit 5 without reply. Sean McGrath and Leon Shambala hit 2 each with Alfie Christie getting the 5th.

Killorglin again are into the next round without kicking a ball as Coole also didn’t field a team at this age. All the other Kerry sides went out with Listowel Celtic narrowly loosing 5-4 away to Mungret Regional. Darragh Mackessy, Devan McKenna, Jack Kennelly and Brendan O’Neill were the Listowel Celtic scorers who were very unlucky not to take the game to extra time.

Camp went out away to Pike Rovers, Ballyhar, for whom Dylan Callaghan scored, lost to Avenue Utd also away while Inter Kenmare put up a good battle before going down to Caherdavin United. Boki Nikic got the goal for Inter. Harry Potts scored to put Killarney Athletic 1-0 up away to Regional United. But the Limerick side hit three in the second half to go through to round 2. Mastergeeha were beaten 5-0 at Broadford United.

St Brendan’s Park were the biggest winners of the day as they were much too strong for Kilbehenny Celtic at Christy Leahy Park.

Dylan O’Sullivan and Thomas Burke both hit hat- tricks, Simon Kederski 2 and Eoin Lynch (pen), Cian Holden and Joe Benjamin all scored for the Tralee side.

Like in the 14’s Coole FC didn’t field a team so Tralee Dynamos are through.

Ruadhain McCarthy score for Camp away in Limerick but the home side took over after the break winning 5-1. Killarney Athletic had a goal from Ryan Casey in their game away to Knocklong / Hospital. However the Limerick side scored twice to take the win.

Killorglin put up a great performance against Limerick FC but in the end went down 2-0.

In the 12’s Division 1 James Horgan was the top scorer for Ballyhar hitting a hat trick with Brian Burke and Ethane Whelan getting the other goals as they defeated Killarney Celtic B at Celtic Park. Killarney Celtic C won away at Killorglin 2-1. Jack O’Sullivan scored for the home side but goals from Aaron Moloney and Josh Livingston earned Celtic the points.

Division 2 saw Camp B defeat Asdee 3-2 while The Park B were just a bit better than their club-mates on the C team.

Killarney Celtic B travelled to South Kerry and came away from Iveragh United with all three points. Adam McMahon, Aaron Moloney, Lorcan Martin and Donal Lucey got the goals for Celtic in this 14 Division 1 clash

In Division 2 Listowel Celtic C were 5-3 winners at home to Park B. JP O’Carroll and Michael Nolan both hit two goals each. Micheal Slattery scored the other.

The Dziedziuck boys Tony and Mark scored one each with Tony Duggan netting the 5th.

St Bernard’s and Listowel Celtic C were involved in the game of the day with 13 goals between them. Oisin Maunsell hit 4 with Declan O’Donoghue, Darragh Slattery, Sean Murphy and Mikey Clifford all scored for St Bernards.

Asdee had 4 goals from Jack Farrell and one from Alec Laureant in their 5-2 win over Fenit.

In this Division Listowel Celtic B and Cromane played out a scoreless draw while in the other game Iveragh United were beaten at home by Park 4-3.

Team of the Week