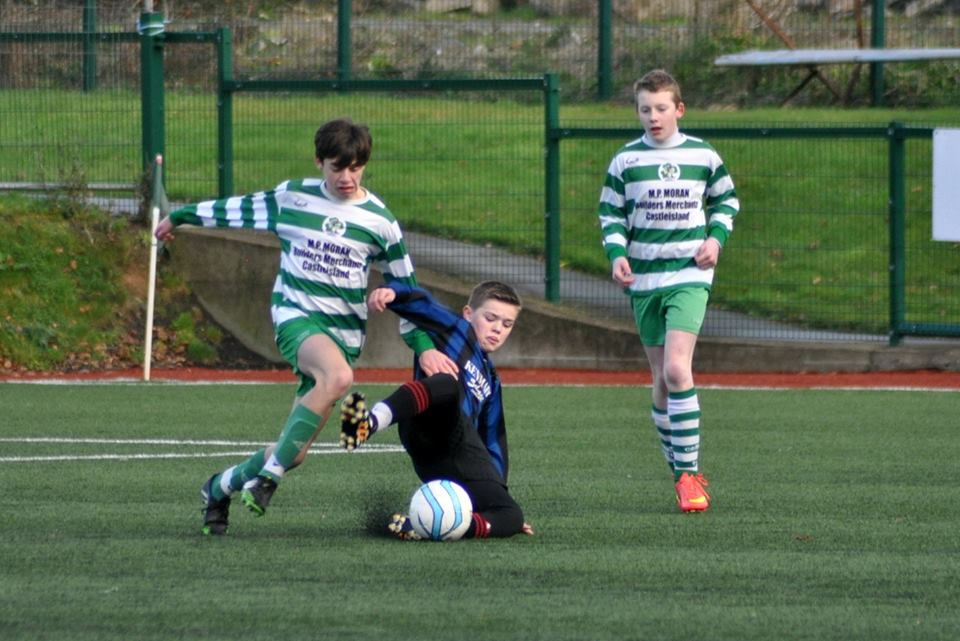 3Peat for The Park:

There are very few nights that a club will take part in three Cup finals and win the three of them. That’s what St Brendan’s Park did on Friday night in Mounthawk Park.

A Result for B’s:

The 11’s Shield final saw the B teams of St Brendan’s Park and Listowel Celtic enjoy their moment in the spotlight. It was a very tight encounter between the sides with The Park’s Kieran O’Connor getting the only goal midway through the second half. To be fair The Park were creating the better chances and it took a Man of the Match performance from the Listowel Celtic keeper Chris McQuaid to keep the score at 1-0.

Come from behind win for Park:

The 11’s Cup final was a cracking game between The Park and Mastergeeha as these young players put on a great show in their first Cup final thrilling the big crowd that were present. Colin O’Leary who had an excellent game put Mastergeeha in front with almost their first attack.

The Park were creating more of the chances with Cinnan Cooney particularly dangerous. He got the equaliser in the second half and from there The Park pushed on. They went 2-1 ahead through Ben Hannafin and when Cooney got his second they were on their way to victory. Dan O’Connor wrapped up the win but credit to Mastergeeha they fought to the end and keeper John Cronin showed great mental strength for a young player as he recovered from a mistake to make some very good saves. Cinnan Cooney of The Park was named Man of the Match.

Camp Juniors are one of the League’s most progressive clubs and were contesting their first ever Cup final when they took on The Park in the Tom Hayes 14’s decider.

However they got off to the worst possible start as The Park went 1-0 up inside 15 seconds. Sean McGrath got the ball from the kick-off and weaved his way passed a frozen defence to give his side the dream beginning. McGrath was the star of the show and he showed all his skill with his second on 20 minutes as he left a trail of defenders in his wake.

He completed his hat trick in the 50th minutes when he controlled a long ball, turned and volleyed home in one movement. Try as they might Camp Juniors had no answer to the potent Park attack and McGrath made it 4-0 on 60 minutes. Padraig McCannon got in on the scoring act 5 minutes later when he headed powerfully home from a corner and Mervyn Shalemba completed the win with the 6th late on.

This final saw an experienced Listowel Celtic side defeat a younger but improving Killarney Athletic side. Credit to the Woodlawn girls they did very well for the opening 20 minutes at which point the game was still scoreless.

However it was always going to be a case of when rather than if Aoife Horgan would score and midway through the first half she opened the scoring. She added two more in quick succession to break Athletics resistance.

Into the second half and Aoife scored again and her goals were added to by strikes from Mairead McKenna and Caoimhe Spillane. Credit to the Athletic girls they never gave up and were rewarded with a goal from Ciara O’Mahony.

Killorglin knew that a home win over Killarney Celtic would see them crowned JK Sports 12 Premier champions. They achieved their aim with a 1-0 win thanks to a Dylan Murphy goal. The back four of Killorglin were the basis for the win with Cillian Burke and Tom Whittleton particularly impressive.

Inter Kenmare were presented with their Shield before this game as they wrapped up the JK Sports 12 Division 1 title last week. Here the defeated Killirglin B 4-1 to complete an unbeaten season. A Corey Murphy hat trick and one from Mark Thorpy were the Inter scorers.

Mastergeeha are second thanks to their 3-0 win at home to Killarney Athletic. Brendan and Sean O’Leary and Cian Murphy were the Kilbrean side’s scorers.

Tralee Dynamos ensued themselves of the runners up spot in the JK Sports 12 Division 2. Daniel Burke hit 5 in a day to remember for him with Dylan Walsh netting the other goal in a 6-2 win away to Asdee Rovers.

In the Daly’s Supervalu 13’s Division 1 Killorglin are odds on to take the title and closed the gap on Killarney Athletic to three points, with games in hand, following a win over Killarney Celtic C. Mark Doyle, Kaiya O’Flaherty, Jack O’Leary, Gar Hassett, Darragh McFeffery, Stephen O’Loughlin and Max Doyle all got on the score sheet.

Inter Kenmare’s win over Mastergeeha in Kilbrean Park sees them in with a chance of a top two place. They are now just 2 points behind their opponents with a game in hand. Dylan Murphy got all 3 goals for Mastergeeha. But it was Colin Crowley of Inters day as he hit 5 with Darragh O’Brien getting the 6th.

Two goals from David Ryle and one each from Jonathan Trant, Chris Nolan and Neal Cassidy saw Fenit take the points in a 5-2 home win over Park B. Tony Duggan got both the Park goals.

The Park B now lead the way on their own now thanks to a 3-0 win over Inter Kenmare B.

Camp Juniors get the point they need:

With the Tralee Trophy World 16 Division 1 League title up for grabs the two sides involved met in Camp on Sunday night. A point would be enough to give the home side the title while Ballyhar needed to win. Camp Juniors went   2-0 ahead mid-way through the second half thanks to a penalty from Joe Kennedy which doubled the lead given to them by a Jimmy O’Grady goal.

Ballyhar were never going lie down once there was a League title at stake and they drew level with goals from Ciaran and Jake Flynn but Camp Juniors held on to take the 16’s Division 1 title.

The inaugural Kerry Schoolboys Girls League Invitational 13’s League was held in Christy Leahy Park. The Desmond League, Cork Schoolboys and West Cork were the visitors. With Kerry having 2 squads in action on the day all teams played 4 games in what the League hopes will become an annual event in the 13’s calendar. With trophies for the each squads Player of the Tournament Sean McGrath and Melvyn Shalemba picked up the awards for the Kerry Yellow and White squads.

Players of the Week:

The following were the stand-out players of the week:

In the Girls the stand out players were Aoife Horgan Listowel Celtic 14’s and Ciara O’Mahoney Killarney Athletic 14’s.