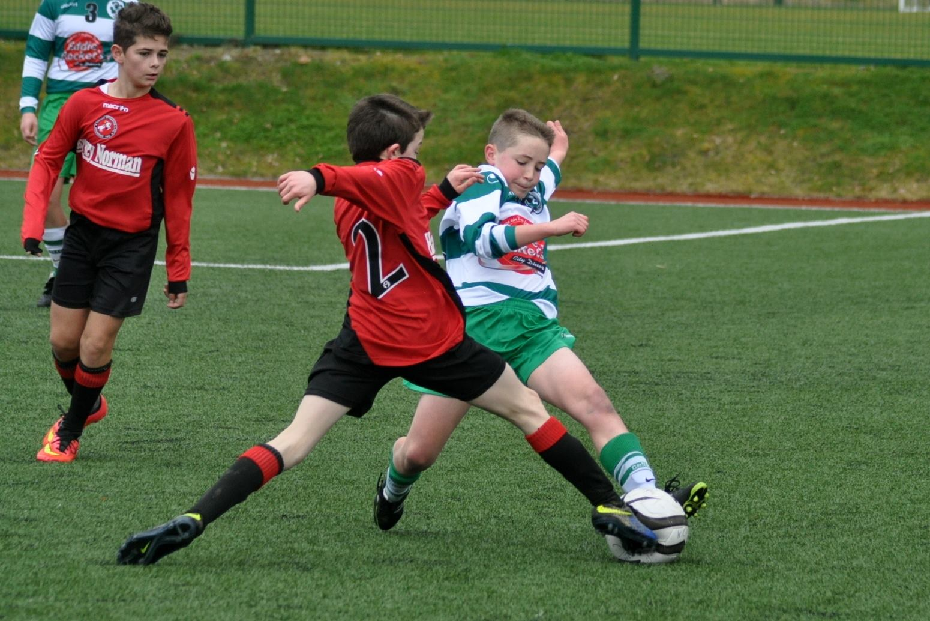 November 4th 2017 Results and Reports:
National Cup 13’s:
Round 2:
Aisling Annacoty B 3 -1 Park
Tulla 1-3 Mastergeeha
Kilcrush Crusaders 6-1 Camp Juniors
Round 3:
Killorglin 3-1 Iveragh United
National Cup 15’s
Round 2:
Janesboro 3–2 Inter Kenmare AET
Fairview Rangers 1 –2 Camp Juniors
Daly’s Supervalu 13 Division 1:
Killarney Celtic B 0–1 Tralee Dynamos
Inter Kenmare 5–1 Dingle Bay Rovers
Division 2:
Mastergeeha B 2–4 Fenit
Killarney Athletic B 4–4 MEK
Park B 3 –2 Killorglin B
Killarney Plaza 15 Division 1:
Killorglin B 4–0 Fenit
Tralee Dynamos 4–3 Listowel Celtic
15 Division 2:
Windmill United 2–1 Park B
Ballyheigue 6–1 Dingle Bay Rovers
JK Sports 12 Girls League:
Killarney Celtic White 2–4 Camp Juniors
Fenit 0–8 Killarney Celtic Green
Reports:
Killorglin 13’s one step away from National Cup Open Draw:
Killorglin are into Round 4 of the Subway 13’s National Cup and only one win away from the Open Draw for the Last 32. They won the all Kerry clash defeating Iveragh United 3-1 thanks to a Jack Lynch hat trick and with captain John Touhy in excellent form.
The Park were too strong for Aisling Annacotty B in Limerick winning 6-0. Dara Cunnane hit 3 with the others coming from Callum O’Sullivan, Odhran Ferris and Venis Jahiri. They are at home to the winners of Connolly Celtic and Ennis Town in Round 3.
Mastergeeha had one of the performances of the day as they saw off Tulla away in Clare. Goals from Eoghan Kelly 2 and Hugh Lenihan gave them a 3-1 win. They will be at Kildimo in the next round.
Camp Juniors National Cup journey is over as they went out to Kilfrush Crusaders 6-1 with Darragh Crean getting the Camp Juniors goal.
Camp Juniors enjoy great away win in the 15’s Round 2:
Camp Juniors are into Round 3 of the 15’s National Cup after and excellent 2-1 away win at top Limerick side Fairview Rangers. Oisin Smailes put the Kerry side ahead after he tapped in a super cross from Thomas O’Donnell. Fairview went all out for an equaliser but new Camp keeper Patrick Saunders made a number of important saves.
The home side equalised on 60 minutes but 2 minutes later Camp Juniors were back in front when Smailes got his second after a super free kick. Some excellent defending from Caolan O’Connell and Alain Beaujouan saw Camp hold on for the win.
Camp Juniors will now welcome Janesboro in Round 3 as the Limerick side got past Inter Kenmare after extra time. Eoin O’Shea and Aiden Crowley got the Inter goals who had Mark Casey in outstanding from but they just came up short as Janesboro got the only goal of extra time.
The 15’s National Cup is proving to be a good one for Kerry sides with The Park already through to Round 4 and Killarney Celtic and Killorglin meeting to see who also progresses to the round before the open draw.

League Reports:
Opening Round of the 11’s:
The opening rounds of the Moriarty’s Centra 11’s Divisions will be non-competitive before a number of weeks which are used as a grading tournament ahead of next seasons JK Sports 12’s Divisions.
This week there were close wins for Killarney Celtic, Killorglin and Killarney Athletic in the Premier South A and B while Tralee Dynamos, Killarney Athletic C and Killorglin C just got over Killarney Celtic C, Inter Kenmare and Listowel Celtic C in Premier C South.
Fenit and Iveragh United could not be separated in Premier D while Dingle Bay were just a bit better than MEK in a thriller.
In the North Division Tralee Dynamos had narrows wins over Camp Juniors in Premier A and B while LB Rovers and Park won a game each.
Inter Kenmare go 3 from 3 in 13’s Division 1:
Inter Kenmare made it 3 wins from 3 games in the Daly’s Supervalu 13 Division 1 as they defeated Dingle Bay Rovers 5-1 to go above the West Kerry side who remain on 7 points from their 4 games. The game was tied 1-1 at half time with Yago Cornelis scoring for Inter and Sean Roache replying for Dingle Bay.
But it was all Inter in the second half with Cornelis getting his second and this was added to by goals from Darragh O’Sullivan, Vaughan O’Brien and Sean Treyvaud.
Tralee Dynamos will be delighted that their work on the training ground has paid off and they will enjoy their first win of the season after defeating Killarney Celtic B 1-0. Tom Quilligan was the Tralee sides hero.
Fenit now the only unbeaten side in 13’s Division 2:
Fenit are onto 9 points from their 3 games and top the Daly’s Supervalu 13’s Division 2. Their latest win came courtesy of a 4-2 away win at Mastergeeha B. Fenit led 2-1 at half time and their goals came from Gearoid O’Connor, Barry Hamilton, Oisin McGibney and Donagh Murphy. Euan Evans and Ryan McGuirl got the Mastergeeha B goals.
Killorglin were unbeaten coming into the days games but lost out to Park B 3-2. Ethan O’Mahoney scored both Killorglin goals in the first half but they were unable to add to these.
Killarney Athletic B and MEK shared the points in a 4-4 goal-fest. MEK went 1-0 up after three minutes thanks to Cian Fleming. Sam Buckley got the next goal for the mid and East Kerry side before half time. Into the second half and Finn Kennelly scored with a great chip before Eoin Mannix scored to put MEK 4-3 ahead into the closing stages. However Killarney Athletic equalised with the last kick of the game. Their goals came from Rocco Sheehan penalty, JJ Sheahan, Sean Wickham and David Sullivan.
Tralee Dynamos up to second in 15’s Division 1:
Tralee Dynamos got the better of Listowel Celtic in a 7 goal thriller which saw them move up to second place on 4 points from 2 games played, just behind Ballyhar who are on 6 points from their games. Andy Rogers hit two for the Tralee side with Patrick Moravski and Danny Burke getting one each.
Killorglin B had their game against Fenit under control at half time as they led 3-0. They added one extra in the second period to win their first game of their campaign.
Historic win for Windmill in 15 Division 2:
Windmill United were playing their second game since they joined the Kerry Schoolboys Girls League and they made it a winning one defeating Park B 2-1. Eric McMahon and Tomas Sullivan got the historic goals for the Blennerville side.
Ballyheigue continued their good start to the League as they proved too strong for Dingle Bay Rovers. They had goals from Oisin Maunsell, Thomas Gaynor, Seanie Foran and Gavin Slattery.
Camp Juniors and Killarney Celtic Green enjoy opening day wins:
Camp Juniors enjoyed an opening day win in the JK Sports 12 Girls Premier. Tiarna Murphy hit 2 and Eabhna Lyne and Savi O’Connor one each in their 4-2 win over Killarney Celtic White at Celtic Park. Aine Fitzgerald got both the Celtic goals.
Killarney Celtic Green were a bit to strong for newcomers Fenit who fought to the end. Leah McMahon, Katie Doe and Fiana Bradley – just back for playing with the Munster ETP squad were the standout players for Celtic while Katie Fitzmaurice and Lily Novak were amongst those who did well for Fenit.