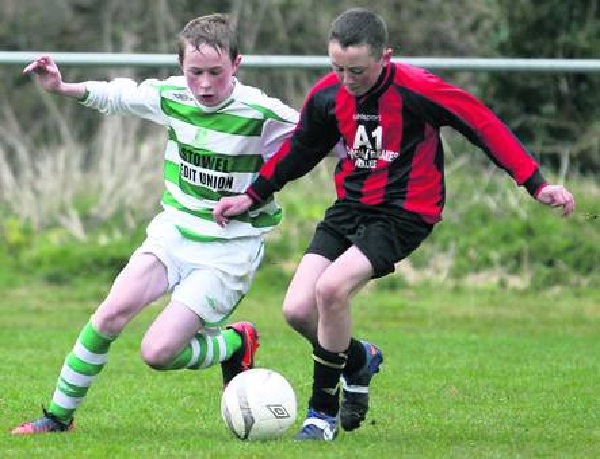 Park A 1-2 Killarney Celtic A

The 11’s were back in action with action in the 3 Groups. Killorglin just got the better of Tralee Dynamos A in Group 1, Killarney Celtic C and Killarney Athletic A were the winners in Group 3 as they managed to come out on the right side against Inter Kenmare and Mastergeeha. Camp Juniors and Castleisland won tight games against Ballyhar and Fenit.

It is a sign of the strength of girls soccer in Kenmare that Inter have entered 2 girls teams into the League. Both went down this week but have really settled well into the competitive action.

The A’s lost out to Celtic in Killarney thanks to goals from Caoimhe O’Shea 3, Keri Ann Hanrahan, Lucy Cronin and Aine Devlin.

Listowel Celtic were playing their first game but even at this young age this side are experienced and defeated the Inter B side. Aoife Horgan, Katie Keane and Eva Roche Hussey were the Listowel Celtic scorers while Gemma O’Brien replied for Inter B.

Park misses out on the chance to go joint top of the Premier:

With leaders Tralee Dynamos, on 10 points, not playing The Park had the chance to join them at the top but they went down in a cracker against Killarney Celtic at Christy Leahy Park. Emmet O’Shea and Evan Looney put Celtic 2-0 up before Conor O’Sullivan replied for The Park. It looked like the Tralee boys were about to go level but Celtic keeper Darragh Dineen brought off a brilliant move to keep his side ahead. Celtic are no on 7 points, level with the Park.

Listowel Celtic took advantage of the Park’s loss as their win away at Ballyhar sees them move onto 9 points and into second place. Micheal Nolan hit a hat trick and Ronan O’Neill got the 4th while Dylan Callaghan replied for Ballyhar.

First met second in the Killarney derby with Athletic taking the points in a 3-1 home win over Killarney Celtic B. Jack Cooper hit 2 and Darragh Kelly a third with Celtic’s goal coming from Cian O’Leary. Athletic are now on 12 points from their 5 games.

However there are two unbeaten sides in the Division as Inter Kenmare and Killorglin B are now on 3 wins from 3. Inters latest win came away to Killarney Celtic C thanks to 3 goals from Cian O’Connor and 2 each from Daniel Crowley and Tommy Cronin. Krystian Wielgus did a Trojan job to keep Celtic in touch as he hit all his sides 4 goals.

Killorglin B also won on the road as they defeated Mastergeeha in Kilbrean Park. Gar Hassett 2, Ethan Coffey, Stephen O’Loughlin, Jack O’Leary and Dylan Francis were the scorers for the winners while Darren Lehane got the Mastergeeha consolation.

Dingle Bay Rovers and St Bernard’s came into the game level at the top of the table but it was the West Kerry side who won easily to jointly lead the Division. Dara O’Beaglaoi scored 3, Cathal O’Beaglaoi 2 and Josh O’Cinnaide, Dylan Geaney and Colm Heartain one each for Dingle Bay. Michael O’Sullivan and Oisin Maunsell replied for St Bernard’s.

Ballyheigue United continued their great return to the League with a 2-0 away win at Fenit to join Dingle Bay at the top. Thomas Gaynor and Seamus Foran got the goals.

Camp Juniors are hot on the heels of the two sides above them and are only a point behind. Cian Cronin scored twice, Stephen Galvin Smith, Cian Wright and Maurice O’Connell got the Camp Juniors scores.

Tralee Dynamos had struggled a little before Christmas but got the New Year off to the perfect start with a 5-3 away win at Kilbrean Park. Dara Lowth and Dillon Robinson both scored twice and Kevin Williams added a 5th as the Tralee side took all three points. James and Paul O’Shea and Dylan Murphy scored for Mastergeeha.

With leaders Listowel Celtic and second placed Park A not in action Killarney Celtic A took their opportunity to close right up on both of them following a hard fought 3-2 away win at Camp Juniors. Franz Sauerland put the home side ahead before Josh Fleming equalised for Celtic only for the Hoops to go behind again through Killian Falvey. An Ian McGillycuddy penalty tied it up again. Killarney Celtic’s Michael Devlin headed in a late winner to take all three points.

Inter Kenmare take over the lead of Division 1:

Inter Kenmare’s Dylan O’Connor hit 4 goals to set his side on the way to the top of the 15’s Division 1. His goals were added to be scores from Daniel Casey and Darragh O’Connor in their 6-1 win. Adam Ward got the consolation for the Park.