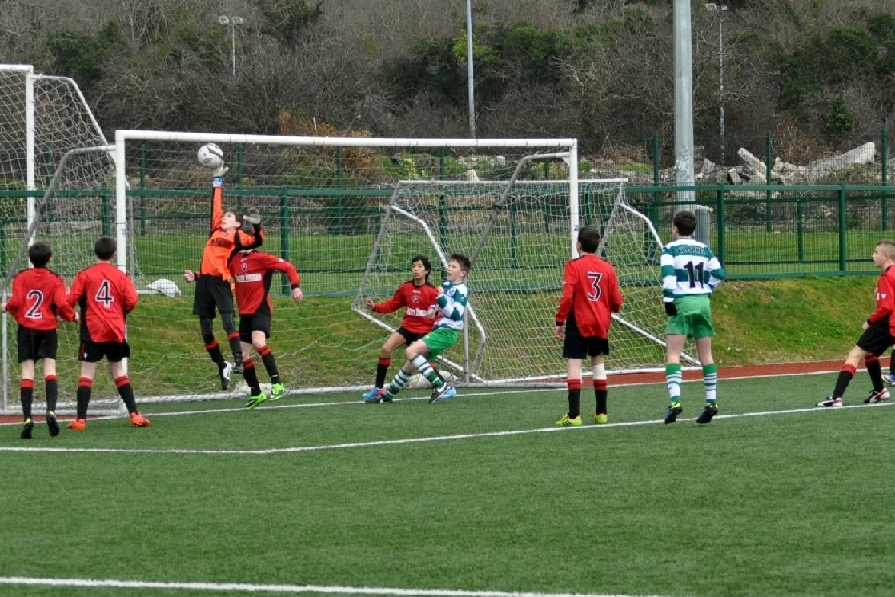 16’s Division 2
Feint 3-1 Castleisland.
Match Reports from Week 1:
Killorglin early leaders in 12 Premier:
Killorglin are the first team to top the JK Sports 12 Premier following their 5-0 win over Inter Kenmare. Ben Levy, Andrew Owens, Niall O’Brien, Stephen Gannon and Liam Hayes got the Killorglin goals.
Killarney Athletic just got the better of Dynamos in Tralee 3-2 in a game that swung both ways. Dynamos were 1-0 up and then 2-1 down before levelling matters. However it was the Killarney side that got the winner with all their 3 goals coming from Thomas Healy. Mathew Rogers scored both goals for Dynamos.
Killarney Athletic and Iveragh United shared the spoils in a 1-1 draw. Josh Bowler scored for Celtic with Evan O’Sullivan replying for Iveragh.
Listowel Celtic and Killorglin B the winners in Division 1:
Listowel Celtic A signalled their intent of being one of the teams to beat with an opening day 7-2 home win over Castleisland. Evan Boyle certainly made an early season mark as he hit 4 goals with Oisin Healy, Ryan O’Rourke and Joshua Magdziak also on the mark for Killorglin. Jack Joy and Eoin Shire replied for Castleisland.
Two goals from Darragh Clifford, one from Jack McGrath and an own goal gave Killorglin B a 4-3 win over Tralee Dynamos.
Camp’s 7 up in Division 2:
Camp Juniors proved too strong for Mastergeeha B in Camp. Fionn Dario, David Moore and Paudie Fitzgerald all hit two goals each with Diarmuid Waugh getting the other goal in a 7-0 win.
Listowel Celtic first to top 14 Premier:
Listowel Celtic had a 4-0 home win over Tralee Dynamos to become the first team to top the newly sponsored Quills Woollen Mills 14 Premier. Kieran O’Carroll scored twice for the North Kerry side with Rob Stack and Anthony Kavanagh getting the other two.
Killarney Celtic and Killorglin drew 2-2. Luke O’Neill and Peader Kelliher had Killarney Celtic 2-1 up after Adam Owens had scored for Killorglin. However a second from Owens saw the sides settle for a point a piece.
Away win for Ballyhar:
Ballyhar began the new season with a 7-3 win on the road away to Inter Kenmare. James Horgan hit 3, Stephen Palmer 2 and Aaron Burke and Luke Ring one each in the win.
Game of the Day in Division 2:
There was no doubt as to what was the game of the day. It was the clash of LB Rovers and MEK. The North Kerry side were 4-0 ahead at half time and then added a 5th early in the second half. But MEK (Mid and East Kerry) were never going to stop trying and they pulled one back and then another. Amazingly with 10 minutes to go it was 5-5 but the home side scored next to restore their lead at 6-5. As MEK tried hard to draw level again it was LB Rovers that scored to secure the win.
For LB Rovers Mikey Dunworth hit a hat trick, Padraig O’Connor 2 with Jack Mallon and Jack Sheehy getting one each. For a gallant MEK Eddie Moroney hit 3 and Sam Buckley and Sam Griffin completed the scoring.
Dingle Bay’s 3 in 16’s Division 1:
In the Tralee Trophy World 16 Division 1 a Colm O’hEartain hat trick gave the West Kerry side a 3-1 home win and the 3 points following their win over Iveragh United. Sonny Curran got the Iveragh goal.
Fenit take the points in Division 2:
Cormac Lynch, Gavin Burrows and Liam Tobin got the goals for Fenit in their 3-1 home win over Castleisland. Lynch put the home side ahead but Connie O’Connor equalised for Castleisland. Fenit then hit the last two goals to take all three points.
Team of the Week:
Darragh Foley
Killorglin 12’s
Peadar Kelliher Eddie Moroney Alex Kelly
Killarney Celtic 14’s MEK 14’s Iveragh United 12’s
Mikey Dunworth Jason O’Connor James Horgan Darragh Corridan
LB Rovers 14’s Killorglin 14’s Ballyhar 14’s Tralee Dynamos 12’s
Evan Boyle Thomas Healy Eoin Shire
Listowel Celtic 12’s Killarney Athletic 12’s Castleisland 12’s