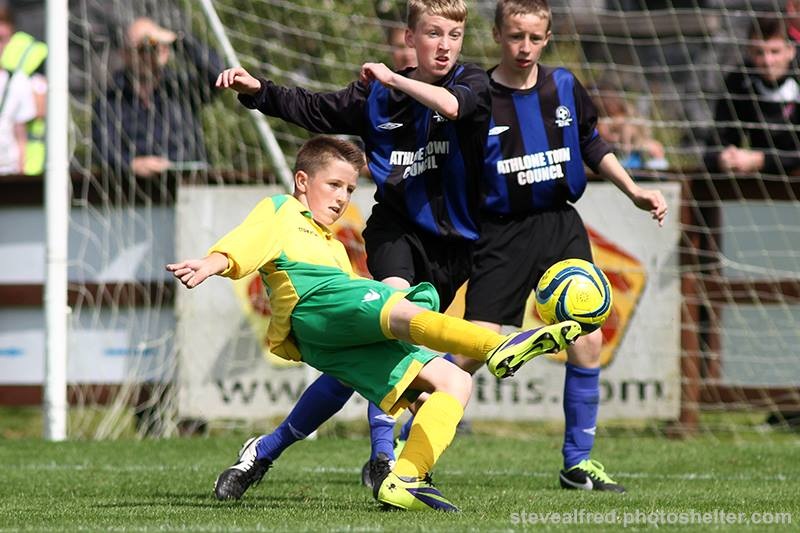 Uneven National Cup’s the highlight of this weekend:

A minimum of 2 Schoolboys League sides were always going to progress to Round 2 of the 13’s National Cup due to the fact of 2 all Kerry clashes. 2 goals from Sean McGrath and one from Melvyn Shambala saw The Park defeat neighbours at Christy Leahy Park.

There were 8 goals in the Killarney Athletic versus Killorglin game with the visitors taking the spoils 5-3. Dylan Moriarty 2, Gar Hassett, Dylan Frances and Aaron Broderick were all on the mark for the visitors and winners while Simon Barthez, Robert O’Shea and Jack Cooper scored for Athletic.

Thankfully a number of other teams also made it through. Inter Kenmare had a very good win at home to Askeaton with Colin Crowley scoring 3 late goals in the second half to overturn a 2 goal deficit.

Killarney Celtic made short work of their trip to Tipp as they defeated Nenagh 5-1. Getting the goals were Evan Looney 2, Emmet O’Shea, Rory Doyle and Padraig Looney scoring for The Hoops who were 4-0 up inside 35 minutes.

Unfortunately Ballyhar went out 5-2 away to Ennis Town where Patrick O’Connor and Dylan Callaghan scored. Camp were beaten 3-0 away in Clare while JP O’Carroll scored for Listowel Celtic but to no avail as they went down 3-1 away to Pike Rovers.

Mastergeeha went 1-0 up early on through Darren Lehane but Murroe were level by half time and the Limerick side took over in the second half scoring 4 without reply.

4 out of 6 Kerry sides in the 15’s have qualified for the next round. Camp had the easiest progression of all as they got a walkover from Coole FC. Killarney Athletic were 2-1 winners over Ennis Town in Woodlawn. Jason Coffey and Finbarr Hickey got the goals for Athletic.

Killarney Celtic were also at home and defeated Holycross 3-0 at Celtic Park. Sean Doherty, Ian McGillicuddy and Ryan Kelliher got the goals for The Hoops.

Listowel Celtic were also drawn at home and made no mistakes as they knocked out Avenue United B. Michael Kennedy, Darragh O’Donoghue, Shane Hughes, Fergal Wall and Cillian Spillane all scored once each to ensure their side progressed.

Mastergeeha had goals from Dylan Murphy and Sean Cahill but they went down to Nenagh at Kilbrean Park while Tralee Dynamos were defeated 3-0 away to Aisling Annacotty in Limerick.

Park B 6-0 Tralee Dynamos B

Killarney Athletic and debutants Iveragh United took the victories from Killarney Celtic C and Ballyhar in Group 3 while Castleisland just got the better of Camp in a cracker.

Killarney Celtic have 3 teams in this age group and the C’s got the better of the B’s in the opening round of games. Josh Livingston hit 3 with Erin Moloney and Ankel also on the mark.

Here again it was a case of Killarney Celtic C’s against the B’s with the former coming out on top 5-3.

Dingle Bay Rovers were playing their first game back in the League and were involved in a cracker back West drawing 4 all with Camp B.

Dara and Cathal O’Beaglaoi scored 3 between them, with Dara getting 2 and the other goal came from Padraig O’Cearna. Camp scored from 2 corners with Oisin Smailes getting one and other being an OG. Stephen Galvin Smith and Maurice O’Connell got the others.

The other newcomers Ballyheigue also picked up 3 points but not in the way they would have wanted as Listowel Celtic B were unable to field a team.

St Bernards are always tough to beat at home and proved it once again with a 5-0 win over Fenit. Mikey Clifford took the match ball with a hat trick which was added to by Gavin Slattery and Michael O’Sullivan.

Castleisland were too strong for the Park C with Connie O’Connor netting a hat trick. Adam Broderick, Don McSweeney, Dylan Curtin, Jordan Coffey, Colm Roche and Daniel Kelly all got one each.

The Park were too strong for the Dynamos after goals by Matthew Dziedziuch, Tony Duggan, Daniel Fok Seang, Brad Teahon, Tyson Esgbare and Samson Ayassi got the Parks goals.

In a midweek encounter the Park travelled to Celtic Park to face Killarney Celtic. Goals from Michael O’Gorman, Mike Slattery and Matt Lukco saw the Park pick up a very valuable 3 points.

Killarney Celtic B’s Eamon Murphy had a day to remember hitting 4 goals with Pierce Lyne Roberts adding another in their win over Celtic .

Killorglin’s 2-1 win over Castleislsnd came after goals from Dylan Fitzgerald and Mark O’Connor.

The Park were too strong for Iveragh United who were playing their first game back in the League. Ed O’Sullivan, Shane Jordan, Jamal Ismail, Conor Higgins 2, David Oba and James O’Connor all got their names on the score-sheet.

3 players from the League are under scrutiny of Irish management at present. Regular wearer of the green Rian O’Sullivan and newcomer to the International set-up Kevin Williams, both from Tralee Dynamos and Listowel Celtic’s Leah Henry are training with various teams at the AUL. There are also 3 Killarney Celtic girls in line for a place on the Munster Schools squad so squad announcements will be given extra scrutiny in the coming weeks.

The draws for the Umbro Women’s FAI Cups were made this week and in the u14’s Listowel Celtic will travel to Carrigaline on the weekend of November 2nd.

In the under 16’s Killarney Celtic will be at home to Adare in the 1st round on November 16th.